Taking a Look at Current Designs.

From what I've read, canoe sailing is a lot of fun, but its a much smaller corner of the boating universe than, say, kayaking or windsurfing. What appeals to me is the simplicity of it; just strap the boat to the roof rack and off you go. Easy set-up, low cost, and low upkeep. Yet it gets you out on the water, and it's real sailing, with all the challenges of getting a wind-driven craft to perform at its best.
My first step has been to search the web for what is out there in this category. Canoe sailing was popular in this country from the 1860's through the First World War. Since then, however, popularity waned somewhat, and there has not been much development of designs, especially for the home builder. 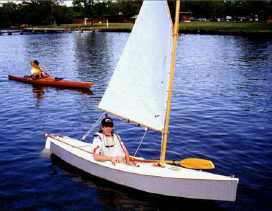 Phil Bolger designed a small, easy to build sailing canoe for John Harris (now of CLC) called the Pirogue. At 12' long by 24" wide, it really doesn't hold two people, and it is tippy under its 30 sq. ft. of sail area. It has a square cross section for maximum initial stability, and can be built from 3 sheets of 1/4" ply. So easy to build, I could make two in the time I have available. Modeling shows that increasing the width to 30" doubles the heeling resistance. Plans for it can be found on the net. 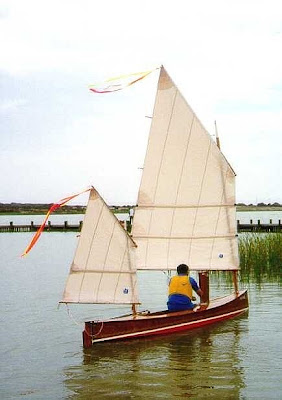 Michael Storer of Australia designed a larger canoe called Beth, 15 1/2' by 32" wide, with about 85 sq. ft. of sail area. It is a fast design but may be a little too much for my son to handle as a first sailboat. The sails can be reduced in area by reefing, though, so the large sail area might be useful on light air days and for the future, when sailing skills are better developed.
As with the Bolger Pirogue, the hull has a square cross section to maximize initial stability and speed on a run. The drawback is higher wetted surface and heavier construction than a hull with a more rounded cross-section, in this case 70 pounds. Plans are available through Duckworks or Michael's web site. 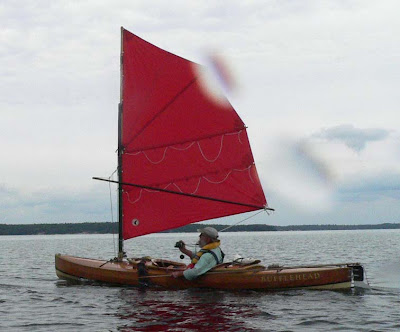 In Michigan, Hugh Horton has spent 20 years developing sailing canoes suitable for taking long trips. Working with the Gougeon brothers of West Epoxy fame, he has incorporated high strength, light weight materials such as Kevlar and carbon fiber into his latest canoe, Bufflehead.
His sail is designed for quick reefing when needed, and has an efficient batwing shape. The hull is a five panel per side stitch and glue design which minimizes wetted surface area. For plans, contact Hugh through Canoesailingmagazine.com. 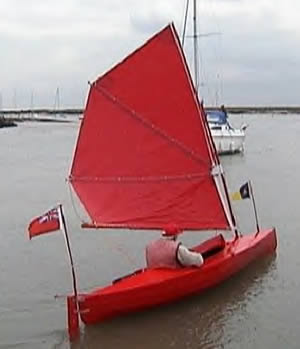 Selway-Fisher of Great Britain has designed a 50-50 canoe, which means it is designed to be equally efficient under either sail or paddle. It uses a batwing sail with a boom and 3 spars. This is more like what I am looking for, though the time to build is a little long, mostly due to the time needed to make parts for the sail rig. Construction is stitch-and-glue, with four panels per side, similar to the Seafox kayak. The first example took over 200 hours to build, so I have to think about an alternative. Plans from Selway-Fisher's web site.
Posted by Geoff Chick Sr. at 9:12 PM 2 comments:

Let me introduce myself. I'm a mechanical engineer by trade, the kind that is constantly visualizing new designs in my mind, and thinking of ways to do things better. I've been doodling boat designs for the past several years, using some of the boat design software available on the web. I don't think that I could build a boat to a standard plan without modifying it in some way (see example below).

My first home was in Swampscott, Massachusetts, just north of Boston. I a child, I remember seeing Swampscott dories along the beach, and visiting the Eastern and Corinthian Yacht clubs in Marblehead, home to some of the most beautiful sailing craft to be found. My interest in boat building began when I was thirteen years old. In shop class, a friend of mine started building the Minimax hydroplane from plans he obtained from Science and Mechanics magazine, so I decided I would build one, too. It took the whole year, and it still wasn't painted when I took it home. I powered it with a Mercury Hurricane 10 hp. motor, and had a ball with it.

I built a slightly larger hydroplane of my own design two years later, and a couple of stitch and glue kayaks five years ago. The experience of building the kayaks influenced the choice of building method for the canoe, since it must be finished in 3 months, and I'll go with what I know.
The kayak shown is a Selway-Fisher Seafox that I modified by designing a curved deck to replace the original two-piece beveled deck. Construction is 4 mm Okoume plywood covered with 6 oz. glass cloth. A very stable recreational kayak, and a good introduction to stitch-and-glue construction techniques. 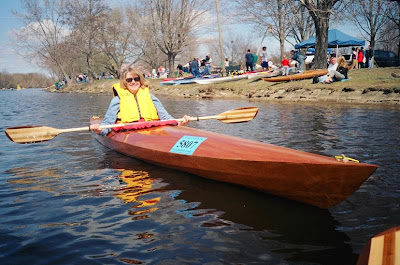 Last fall, my youngest son took a new job near Cleveland. He asked me if I would build him a car-top-able boat that he could sail and paddle, would hold two, and be usable on Lake Erie. Oh, and it couldn't look "Bo-bo", which, since he is an industrial designer, I took to mean he better not be embarrassed to be seen in it. That was the design brief. It sounded like what he wanted was a sailing canoe.
Posted by Geoff Chick Sr. at 9:03 PM 1 comment: