When I was down in Cedar Key a couple of years ago, my son and I met a very nice gentleman named Jim Farrelly who had brought a handsome Melonseed skiff that he had built. Having a backgound in canoing and kayaking, he took a serious interest in my canoe as he thought it would be perfect for exploring the coastal marshlands and rivers near where he lived. After leaving Cedar Key, I received an email from him asking whether plans were available so that he could build one for his own use. I told him I could create a set. So, to make a long story short, he "commissioned" me to do up a set of plans for him.

He went right to work, building as I was providing the drawings, and I had to work at it to stay ahead of him. He used several local woods such as cypress, and opted for a painted hull, in a light color to best show off the lines. I think he took a little over a month to complete it, and immediately left for Key West to try it out. Reviews were very positive, and he brought it to Cedar Key last year where I helped him fine-tune the beautiful sails Todd Bradshaw made for him. Here are some pictures of his "Betaboo"  build and the final result: 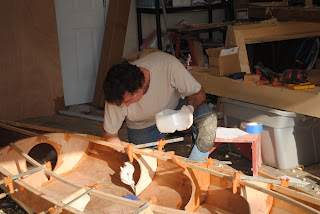 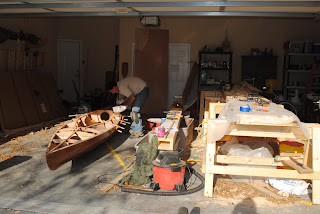 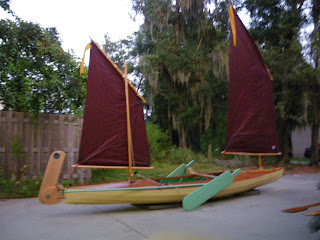 The yellow telltales are a nice touch.

Writes Jim: "Driveway shot of your beautiful design. This boat makes me truly happy and I thank you."

This year the Cedar Key, Florida, small boat meet will take place the week-end of May 4th-6th. Please plan to drop by if you can, there are may great small craft to see and most of the owners would be glad to take you for a spin or let you try them out.
Posted by Geoff Chick Sr. at 11:41 AM 3 comments: