Wiring the Hull Together 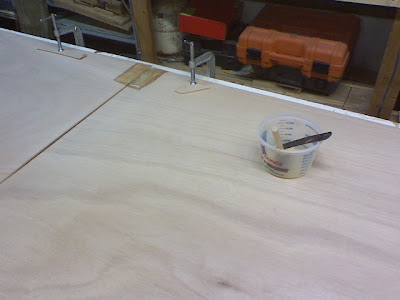 The fourth strake was laid out on the two outside edges of the remaining sheets of plywood. Only enough fiberglass was used to cover what will be cut out. The remaining material will be used for bulkheads, the decking, and deck supports. 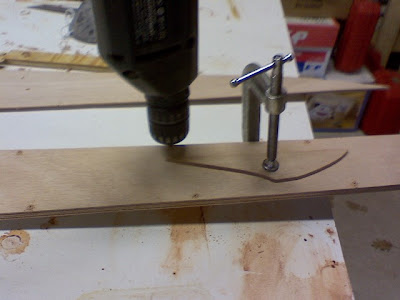 Each pair of strakes was clamped together, and small holes were drilled 6" (150 mm) apart, 1/4" (6 mm) from the edge. These holes were used to wire the strakes together. 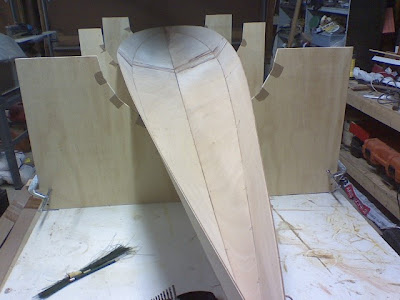 Here are the first two strakes wired together in the basket mold. I used the green steel wire used in gardening to tie back plants. The steel wire is stronger than copper and can take more tightening before it breaks. 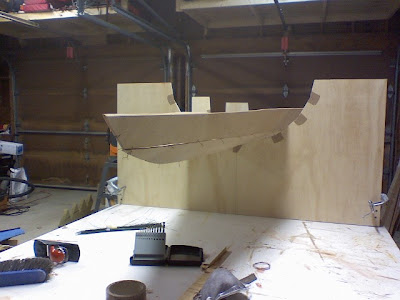 Another view, showing the wires twisted together to secure the strakes. 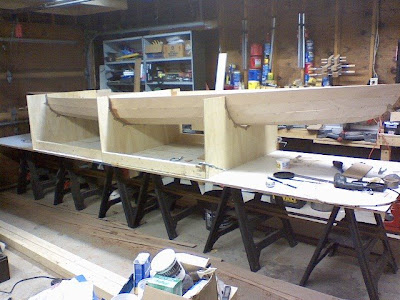 View from the side with all four strakes on each side wired together. Like magic, all the strakes fit together. Starting to look more like a Yakaboo! Note the rounded lower front corner of the bow.

No epoxy has been applied yet. All the strakes must fit properly when wired together since errors can't be corrected easily later on. Fortunately, everything fit together tightly and lined up with the mold.

Cutting out the fourth strake, planing all the strakes for proper fit, drilling the wire holes, and wiring all the hull panels together in the mold consumed seven hours.
Posted by Geoff Chick Sr. at 7:43 PM No comments:

Cutting out the Parts 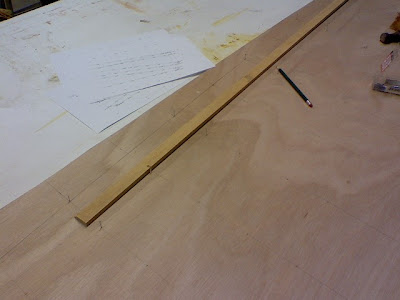 Using the panel layouts from FreeShip, I marked the plywood with grid lines every six inches in the lengthwise direction. Measuring across these lines, I placed a wire brad in the wood at the edge of each plank location. Using a flexible piece of molding as a batten, I connected these points to create smooth curves that indicate the planking outlines. 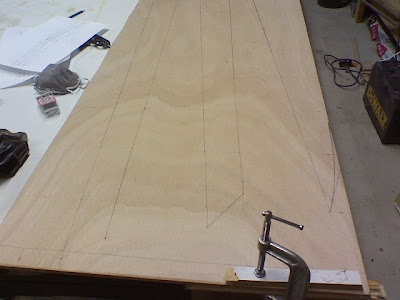 This view shows the lower three planks (or strakes) in place. Notice that on the righthand side, between the clamp and the DeWalt box, I have taken the sharp front corner indicated on the original Hulls model and changed it into a smooth curve using the batten. 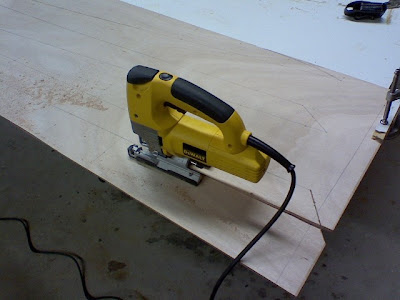 The two 16' x 2' pieces of plywood were clamped together so that one cut will make parts for both sides of the canoe. I made a heavy pencil line so that I can see it through the sawdust when cutting.

I cut just outside the line so that the lines can be trued up later with a plane. 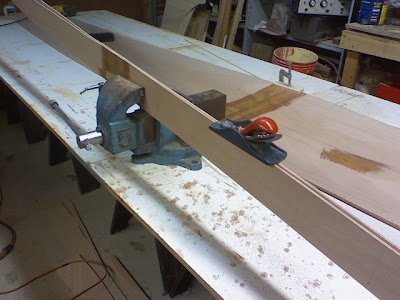 The doubled-up planks were mounted in a vice and planed down to the pencil lines. I planed the bevel needed between the planks at this time also, by adding an angle on the outside edges. When assembled, these outside edges will become the inside edges. 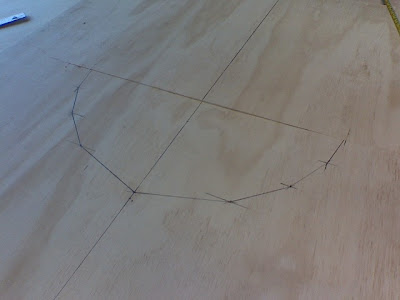 Some 3/8" (10 mm) plywood is marked with the bulkhead dimensions taken at the 48", 96", and 144" stations in the Hulls model. I then marked a cut line another 3/16" outside the first lines, to allow for the thickness of the Okoume plywood.

These parts will be used to make a basket mold in which the hull is assembled. By previous experience with the kayaks I built five years ago, this is the best way to get a true hull shape and tight fitting planks. 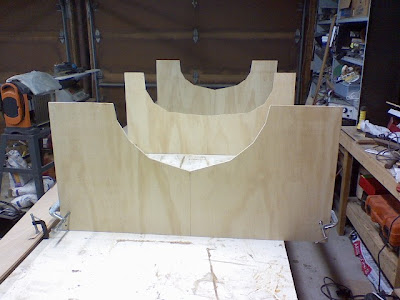 Two eight foot 2 x 4's were cut in half and the four foot sections were used to space the mold sections apart and hold them upright on the table.

In FreeShip, the panel layout can be moved around to get the best fit for minimal waste. Here, the three lower panels are placed on a 16' x 2' grid. The upper panels and the deck go on a 16' x 4' grid. 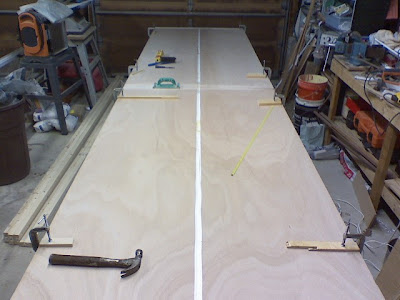 My work table consists of two sheets of 8' x 4' Melamine (plastic laminated particle board), each supported by three sawhorses and bolted together to form a 16' x 4' table.

I drove in to Boulter Plywood in Somerville, MA, to pick up four sheets of 4 mm Okoume plywood. This material cuts and bends so easily, I can't imagine using anything else. Cost is about $50./ sheet.

I clamped the plywood to the table, then marked the centerline for cutting the sheets in half lengthwise. 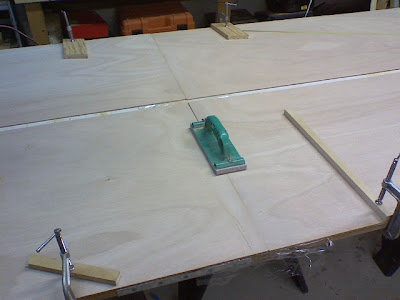 After cutting, the two sheets are reclamped to the table and carefully butted together. The sheets are prepared for fiberglass butt joints by sanding along the joint.

Plastic wrap is placed under the joint to keep the epoxy from sticking to the table. A sheet of polyethylene would be better (smoother) but I don't have any. 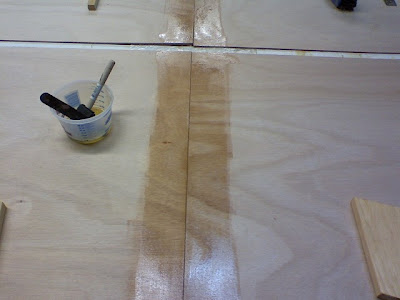 I'm using West System 207 epoxy hardener because I had a good experience with it previously, building kayaks that were finished with varnish. The 207 hardener has UV inhibitors to keep it from turning cloudy, and it saves time because there is no amine blush to clean off when it cures.

I thinned the epoxy with acetone (it's 6 years old) and soaked the area on either side of the butt joint. 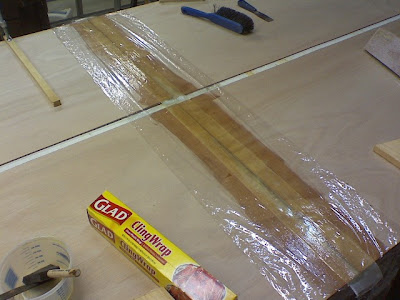 A strip of 6 ounce fiberglass cloth is placed over the joint and wetted out. It is then covered with plastic wrap. 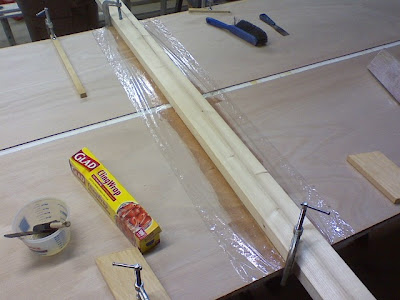 A 2 x 4 is used to apply clamping pressure to the joint. C-clamps hold it to the table. 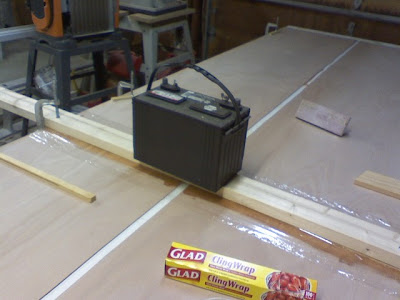 I put a battery on the center of the 2 x 4 to add clamping force in the center. This will set up overnight.

I've made a number of sailing canoe designs in Hulls using 2, 3, and 4 panels per side. By careful arrangement of the panels, I can fit the parts for a 13' x 32" canoe on three sheets of plywood. I'm concerned this is not quite large enough for two people, so I'm going a little larger.

I love the look of the sailing canoes from the golden age of canoeing in this country about a hundred years ago. There is a certain romance about them seldom seen in more modern craft. Several designs have appeared in Wooden Boat Magazine and elsewhere. 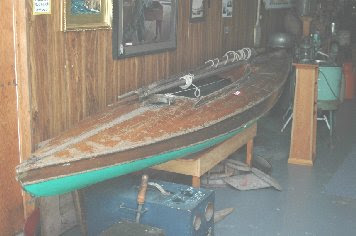 One particular design that appealed to me was the Yakaboo, which is preserved at the Bruce Mines Museum in Bruce Mines, Ontario. According to the museum "The Yakaboo was a cruising canoe, designed and built by W.F. Stevens (Stephens), some say it was designed by Frederic Fenger. It was 17 feet long, 39 inches wide, and weighed 147 pounds. It had no rudder, but was maneuvered by trimming the sails and shifting the centerboard forward or aft as required. Frederic A. Fenger sailed the Yakaboo 800 miles in the Caribbean Sea, from Grenada to the Virgin Islands, in 1911. He wrote a book on his experience, called "Alone in the Caribbean", first published in 1917." 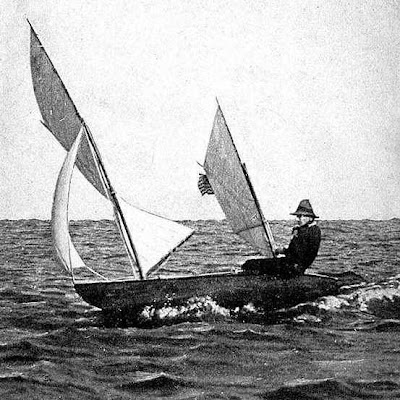 Frederic A. Fenger aboard Yakaboo. You may read about his adventures here.

The lines plan of Yakaboo appeared in Yachting magazine at about the time "Alone in the Caribbean" was published. It showed a low, wide hull with a central cockpit surrounded by a coaming. Replicating such a hull in plywood could be done with 3, 4, or 5 panels per side. I've decided on 4 panels as a reasonable compromise between looks and building time. 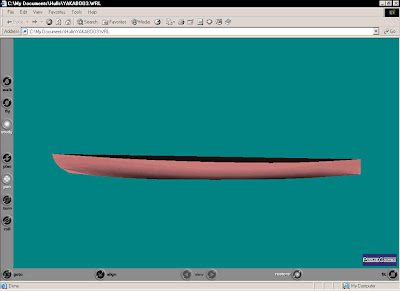 I've made a Hulls model to check the basic design. It has enough rocker to tack well, and enough "keel" to track reasonably well when paddled. The prismatic coefficient is midway between the Selway-Fisher 50-50 Canoe and Michael Storer's Beth, for reference. By rescaling it to 90% of the original size, I have a 15 1/2' x 36" design which can fit on four sheets of plywood. Since each sheet weighs about 10 lbs., it should be light enough for easy cartopping. One of the features of Hulls is the ability to make a VRML solid model of the wireframe model, and view it in a browser (above). This allows me to check for any prominent crease lines in the panels that need to be smoothed out. 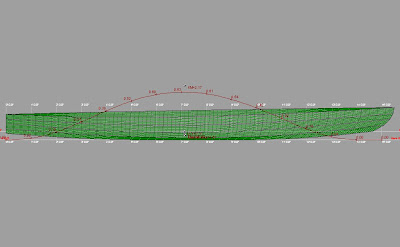 By importing the Hulls model into FreeShip, I can do further design checks. The stability curve is similar to the 32" wide Beth, but with only 81% as much wetted surface, which will aid light wind performance and ease of paddling. 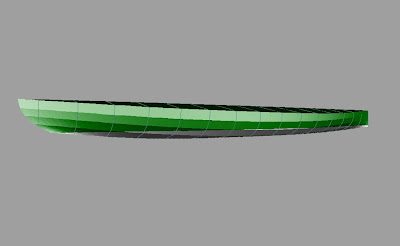 There will be two bulkheads eight feet apart, which will define the length of the cockpit and allow internal stowage of a double paddle. I'm targeting a weight of 45 lbs., using 4 mm Okoume plywood covered with 6 oz. glass cloth and epoxy. I've had to square out the stern to take a rudder, as the original had none, and the cockpit has been lengthened to hold two people. Clamp-on leeboards will replace the original movable centerboard.
Posted by Geoff Chick Sr. at 7:58 PM No comments:

As a first step in coming up with a design to meet the "design brief", I've taken a look at the hydrodynamic properties of some of the designs I previously mentioned, using Gregg Carlson's wonderful "Hulls" boat design software, which may be downloaded for free at http://www.carlsondesign.com/software/add-ons/shareware/hull-designer . I use Hulls as a first step in designing boats because it is easy to enter a few offset points , create a wireframe model and move the frames around until I get a rough model that meets the design goal and fits on standard sheets of plywood. Its also easy to take a look at waterline height, prismatic coefficient, hull speed, displacement, and more. Here is my model of the Selway-Fisher "50-50 canoe":

And here is Beth:

After I create the model, I look at the heeling resistance at 5, 10, and 15 degrees of heel, the prismatic coefficient (how fine-ended it is), and how many sheets of plywood it will take to lay out the parts. I then import the Hulls model into FreeShip, another boat design software package that has more sophisticated capabilities, and I look at wetted surface area, resistance curves at speed, the metacentric height (which relates to initial stability), the stability curve out to 180 degrees, and the curve of areas. Freeship is now DelftShip, which is available in free and pro versions at http://www.delftship.net/ . There is also a FreeShip group on Yahoo Groups that has information and tutorials that allow you to get up to speed faster. The original Freeship 2.6 that I used may still be downloaded at http://sourceforge.net/projects/freeship/files/

I'm ruling out square section designs because their flat panels are not as strong as more curved types, and they therefore need to be constructed with thicker materials. Weight is very much a factor in the design decision. The initial stability is greater with the square cross section than with the more rounded cross section, but this can be made up by making the rounded cross section design a little wider. A rounded cross section design will have 20% lower wetted surface than a square cross section, so it will move more easily under paddle and under light wind conditions when sailing. Aesthetically, it is more pleasing to the eye, as well. Another factor in the design decision is the time required, since it must be done in four months. This tilts the design toward using what I have done previously, a stitch and glue hull using 4 mm Okoume plywood and fiberglass cloth set in epoxy.
Posted by Geoff Chick Sr. at 8:24 PM 3 comments: