In the fall, boatbuilder Clint Chase host an informal get-together at his shop in Portland where small boat enthusiasts can gather to hear a talk given by a well known builder or designer.

The first of these talks featured Michael Storer of Australia, designer of the Beth sailing canoe and the Goat Island Skiff, among others. 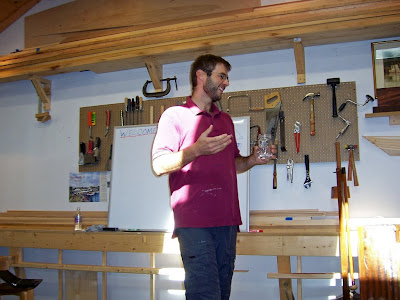 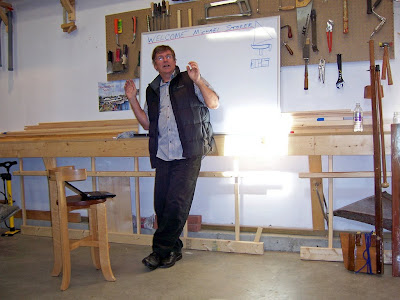 Mik's talk centered on getting the most performance out of the two foils on the boat; the rudder and daggerboard below the waterline, and the sail above it. Even simple, traditional rigs like the sprit sail and the lug sail can give excellent performance if attention is paid to tuning the sails to control draft and twist.

Mik showed how to tune these sails for best performance, and how to design rudder and daggerboard shapes for improved lift-to-drag ratios, which is critical for best boat performance, especially to windward. Compared to a flat plate, a good foil shaped rudder or daggerboard can work at twice the angle of attack without stalling.

The following summary is taken from Clint Chase's blog, clintchaseboatbuilder.blogspot.com:
On November 1st I was pleased and honored to introduce Michael Storer, an Australian Boat Designer reputed for his simple, elegant, and approachable boats, to a group of 21 members from the wooden boat community in Maine, Massachusetts, and New Hampshire. Some knew of Storer's work, others have built his boats, and many knew him as an important name and wanted to learn more about the man and his message. His message was simple: that we can vastly improve our boats by paying a great deal more attention to three areas: the centerboard and rudder foils, the spars and sail, and the hull itself. With regards to the foils, Michael convinced his audience that it is the way they are made -- with care towards fair, accurate foil shape and towards a smooth surface -- that most matters. Michael has taken research in optimal foil design and applied these foils to boats that, without them, would not sail nearly as well upwind and would be much trickier to handle. These foils are flat in the middle, thin for reducing weight and wood use, and closely approximate the hydrodynamics of a true NACA shape, without the expense and fuss and awkwardness of a wing-shaped foil in a square centerboard box or rocking around on a flat work bench during shaping.With regards to spars and sails, Michael's point was clear that the most important aspect of spars is that they flex and bend in the right way, the right amount. Spar bend is critical to the ability of a sail rig to absorb a gust, reducing heeling and putting the energy into forward momentum. The sail need not be a 600-dollar racing sail, but a simple polytarp will do cut with round to create the draft necessary to create power in the sail. His PDR Oz boats are a case in point. They all sail with polytarp sails, about a $30 dollar investment. And because they all use the same cloth, they can race against each other without the "upping the ante" attitude that has cause racing to be more expensive and less accessible to more and more people around the world.(MIK: The polysail is not as good as a sail made from proper cloth but it is cheap allowing for experimentation and cutting the cost of something like a PDRacer substantially. But nice boats deserve nice sails. However the flexibility aspect is important for all sails.(MIK: Additionally I think a lot of the discussion about best performing sails is misguided because the lessons of the last 100 years or so of competitive racing have not been applied equally when sails meet. The single most important is controlling twist. A gaff or lug rig where twist is controlled correctly will outsail a bermudan rig where the twist is not controlled. The two traditional rigs that control twist to some degree are the triangular sprit boomed sail and the balance lug. The lug tends to be favoured in storerboats because of the reefing ability, but the sprit is liked for its simplicity and incredibly rapid setup)Interestingly, Michael left the hull out for last. He says the hull is less important because of the way quality foils and spars can make a good boat go faster than it should. The PD racer is a square hull and wide flat bottom. As evidenced by the messabout after the talk, it does go beautifully. Why? Because of the foils and spars, but also because the hull is light. Michael discussed the keys to making a hull light, using light plywood in a hull that is reinforced the right way, using stringers, fillets, butt joints, and interior compartments that create a light, stiff structure with nothing more than 6mm plywood. Fiberglass is heavy and Michael stressed that fiberglassing adds weight with little gain in structural integrity or even abrasion resistance. Most boats being glassed with 6oz cloth do not need it for structure and are not being used in such a way they it is needed to protect the boat from abrasion. Cloth as light as 2-oz cloth will be enough. He said that builders have also succumbed to the "upping the ante" mentality, trying to do things better and better and better than anyone else, ending up with heavier boats and poorer performance.Australia saw another 25-plus years of wooden boat development that America and Europe did not see because of the way that market forces drove us to Fiberglass boats much sooner than they did in Oz. The result is much further refinement of glued-plywood construction and testing in the small boat racing circuits around the country. We are just now learning here in the States, thanks to Michael's generous knowledge sharing and this trip he has made to the USA.(MIK: Australia and New Zealand had a huge amount of rivalry that helped things move forward too with at least half the work being done by the Kiwis. South Africa also did a similar thing with some of its indigenous classes)Afterwards we enjoyed some great rowing and sailing off Portland's East End. We had a PDR, an MSD Rowboat hull #1, my Drake Rowboat hull #1, a mini-bagger, a sailing canoe, a Nutshell Pram. Pictures of the messabout can be seen at the WoodenBoat Forum and at Michael Storer's own Oz Forum:http://www.woodenboat.com/forum/showthread.php?p=2372819#post2372819http://www.woodworkforums.com/f169/Folks will see many of Michael's philosophies played out at Clint Chase Boatbuilder in the Spruce-Composite oars, Birdsmouth masts, and soon foils, tillers, and other components made to improve the performance of customers' existing dories, skiffs, dinghies, and utility boats. 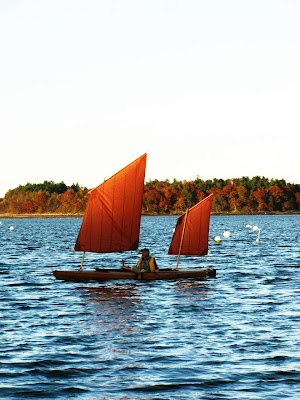 After Mik's talk, we all headed to Portland Harbor for an informal messabout and the chance to sample each other's boats. In the beautiful fall weather I had the chance to take a sail in the Yakaboo 2 against a backdrop of stunning foliage. The wind conditions were just about perfect. 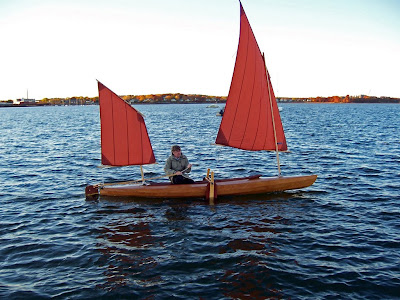 Michael Storer took a spin in my canoe also. Getting the best performance out of sailing craft is second nature to him, as he immediately sat on the deck rather than sit inside, to keep the canoe level. "It sails beautifully" said Mik, who showed off by sailing the boat backwards into the dock by backwinding the mizzen. 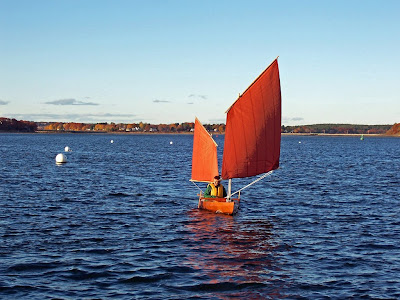 Clint Chase gave the Yakaboo 2 a spin. It was "delightful to sail" he said. 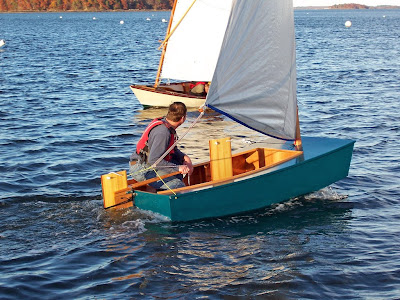 This is a beautifully built example of Michael Storer's version of the Puddle Duck Racer. 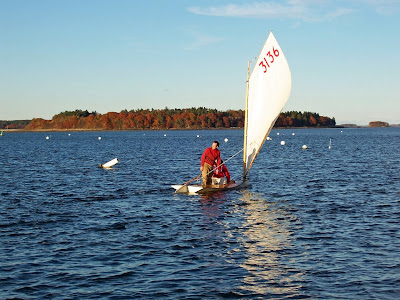 Dan Noyes brought his 12' mini sandbagger that he designed and built as a teenager. 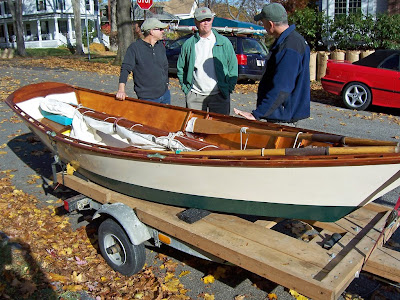 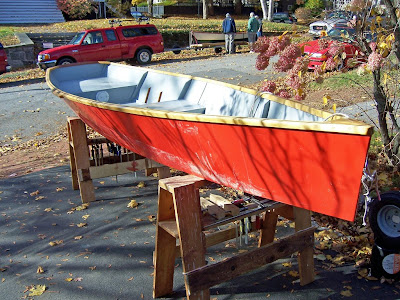 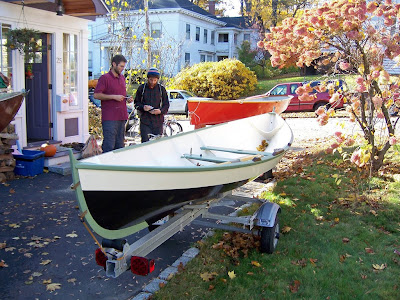